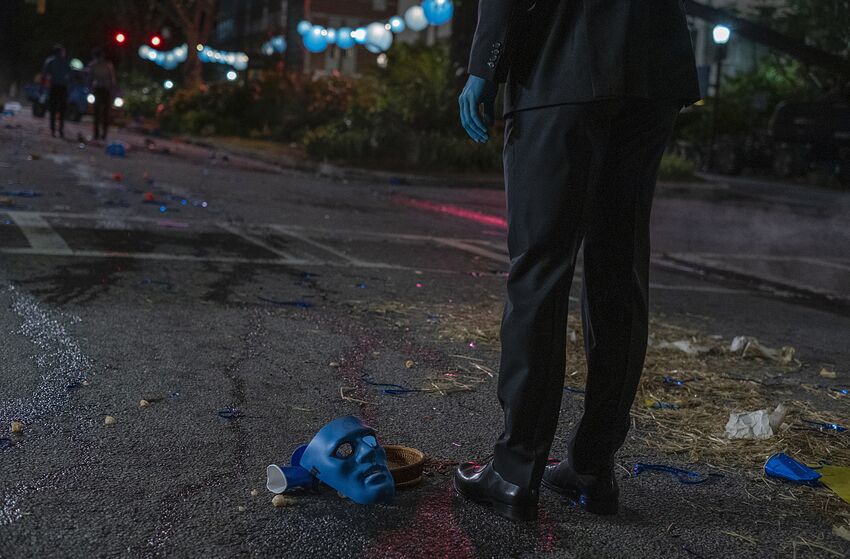 What is Cal & Angela’s backstory? Who is Dr. Manhattan? Where has Adrian been living? Watchmen answers all in “A God Walks into a Bar.” We’ve got the recap!

Damon Lindelof is good at writing two-person relationship scenes. It’s not just because they often have clear beginnings, middles, and ends. His two-handers push the story forward without lazy expos

ition. And, the two characters generally form or represent, the foundation of the main narrative. This happened a ton on LOST. The most effective example there is the relationship between Jack Sheppard (Matthew Fox) and John Locke (Terry O’Quinn). In The Leftovers, the series ended with an epic conversation between Kevin Garvey (Justin Theroux) and Nora Durst (Carrie Coon).

The relationships in these examples ranged from being the essence of good vs evil to unifying the narrative and putting the characters to rest. In “A God Walks into a Bar,” Watchmen has one of these two person scenes.

The episode was written by Lindelof and Jeff Jensen (Tomorrowland). It was directed by Nicole Kassell (Westworld). The episode guide describes this as a reveal of Angela’s (Regina King) backstory. But it’s really about her, Cal (Yahya Abdul-Mateen II), and Dr. Manhattan/Jon Osterman (Yahya Abdul-Mateen II). “A God Walks into a Bar” is the penultimate episode of the season, so it’s natural that the storylines all start to fold in on each other. But this hour involves Dr. Manhattan, so structure and time are thrown out the window.

All of the events in the episode are essentially happening at the same time, even though they are in three different years. Kassell keeps the momentum moving at the right pace. To me, it totally felt like we were experiencing time and events happen simultaneously. That was neat.

Oh. If you tuned out before the preview for the season finale of Watchmen, you missed a post credits scene. It was kind of a big deal. It shows us what happened to Adrian (Jeremy Irons) after he farted at his trial. It also shows us how he might be able to escape the Game Warden (Tom Mison) and play a bigger role than he ever has before.

It’s Viet Nam in 2009. The streets of the 51st state are littered with Dr. Manhattan swag. Everyone believes that he’s on Mars. He is. But, he’s also right there. Dr. Manhattan is walking the streets in his Quentin Tarantino/Band Apart uniform of a black suit with a white shirt. He picks up a Dr. Manhattan mask to blend in with the festivities and enters Eddy’s Bar. Angela has her back to the door.

She took up Officer Jen’s (Jennifer Vo Le) offer in “An Almost Religious Awe” and became a police officer. She’s drinking alone at a table to commemorate the anniversary of her parent’s murder. Dr. Manhattan walks into the bar, takes two pilsner glasses of beer meant for someone else, and sits down with Angela. They will talk for roughly 25 to 30 minutes, but the events of the next ten years are actively unfolding during the conversation. It’s not just narrative. It’s legit happening. 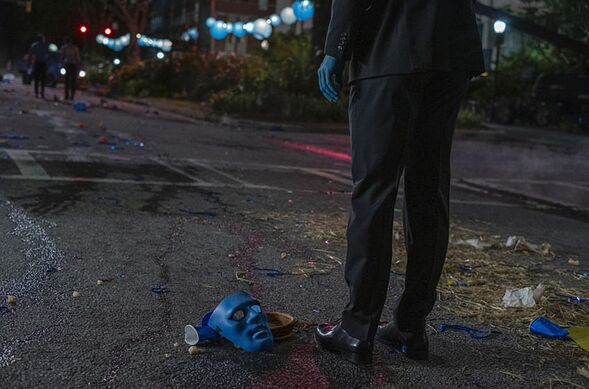 To recap the whole thing piece by piece would take thousands of words. You should really experience this Watchmen episode for yourself. Here are the keys points. Dr. Manhattan introduces himself to Angela. He really wants to have dinner with her, but she’s dubious about him. He tells Angela about her parents in order to prove who he is. He tells Angela that she won’t bring them up for 20 minutes, which is exactly when she ends up bringing them up. Dr. Manhattan eventually introduces himself as Jon. He explains that there is a moment when he falls in love with Angela, but it happens in the future. Jon can’t tell her what it is.

Jon does give Angela enough Reddit-level spoiler threads to pull her into a date. While speaking with Angela in the bar in 2009, Jon is also talking to Angela six months from then, Angela in 2019, Adrian in 2009, and Will (Louis Gossett, Jr.) in 2009. Jon remains completely composed and more amused than the last time we saw him in the Watchmen comic and Zack Snyder’s 2009 film. That’s because he’s created the life he yearned to create and it has given him an inner peace. This is still monotone Dr. Manhattan, but the subtle notion of a soul is stronger than ever.

Angela tells Jon she hates him. If he hadn’t come to Viet Nam and turned into a Viet Cong incinerating 100-foot version of himself, her parents would be alive. There would be no cause for the anti-American terrorist attack. Jon regrets his part in ending the Viet Nam War. But it happened. Unintended consequences are consequences nonetheless.

When challenged about being on Mars, Jon explains that he’s there. But his Alpha version went to Europa in 1985. That’s a moon of Jupiter. There, he created a land teeming with life from an amniotic ocean. Jon teleported a manor building from Earth that belonged to a couple that provided shelter for him and his father when they fled Nazi Germany in 1936. His mother stayed behind. She had fallen in love with an SS Officer. He creates two alpha beings. We know them as Mr. Phillips (Tom Mison) and Ms. Crookshanks (Sara Vickers). Jon eventually has to leave his race of clones because they yearn to worship and fear him. Jon wants no part of that. 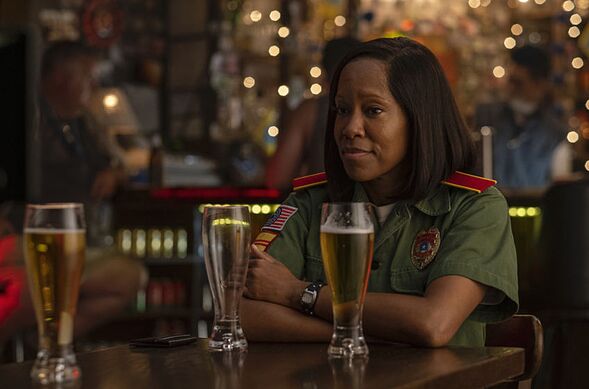 But, Adrian does. In 2009, Adrian is a disheveled old man disappointed in the humanity he saved. He’s watching news of a nuclear reactor meltdown. He laments the lunacy of glossing over cleaner energy resources for a reliance on nuclear power. Jon shows up and greets his old frenemy. Adrian looks over Jon’s new appearance and tells him that he’s a cultural appropriator. The irony of a man who murdered millions warning another man about cultural appropriation is not lost on Adrian. Jon is there to ask for Adrian’s help. He needs a way to forget who he is so he will avoid using his powers.

Adrian immediately asks Jon who he’s fallen in love with. The banter is cool and ends in a trade. Jon will teleport Adrian to Europa where he can live as a demigod. Adrian will provide something he already built. Back in the comics and the film, Adrian tries to kill Jon in an intrinsic field chamber. But that was plan B. Plan A was the device that Angela dug out of Jon’s head at the end of “An Almost Religious Awe.” It’s been bombarded with tachyons, so Jon can’t even see it in time. If he inserts it in his prefrontal cortex, Jon will remain Dr. Manhattan, but will only be able to use his powers as a stress reflex.

In order to blend in with society, Jon conforms into Cal’s likeness. Cal is actually just a poor guy with no next of kin who likely died from a heart attack. There was no need for an autopsy since no one was around to care. The Abar’s become a couple. Then, six months later, Angela and Jon have the Laurie-fight: It’s limiting to be with someone who is in multiple places at the same time and knows the future, but won’t share it. This is why Jon has visited Adrian. 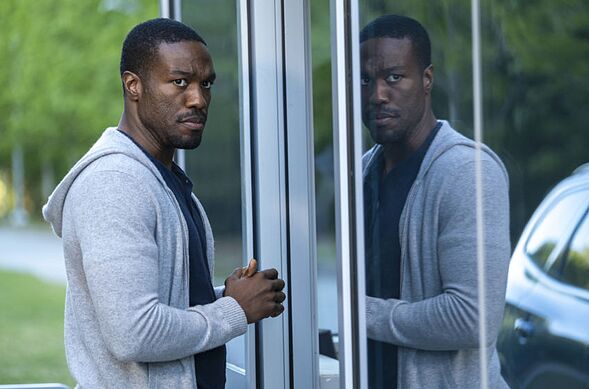 Jon presents Angela with the tachyon ring. He’ll be able to make himself intangible for a few moments, but once the ring takes over, she’ll need to pull out quickly. We learn that it was Cal who saved Angela during the White Night back in “Martial Feats of Comanche Horsemanship.” When the 7th K terrorist was about to kill her, Cal reached out in exasperation and used Jon’s powers to disintegrate the killer. The 7th K has likely been tracking him all along and catered their plan with the knowledge that Dr. Manhattan is in Tulsa.

After the events of “An Almost Religious Awe,” Jon is awake. But, he’s confused. It’s safe to say he is rebuffering. The kids see him walking on the water in the “swimming hole” and become scared. Jon teleports them to a movie theater where Will is waiting. Angela wants to know what the hell Will has to do with this. In 2009, Jon is visiting Will in the home bequeathed to him by Nelson Gardener/Captain Metropolis. Angela asks Jon to ask Will if he knew that Judd (Don Johnson) was a part of Cyclops and had a KKK Robe in his closet. Jon asks. Will looks stunned. Angela realizes she has just reached back in time and ensured that the events of the last seven episodes will play out, murder and all.

Jon is hungry, so he teleports into the house and starts to make waffles. He ponders his first meeting with Angela. He had created an egg to prove he could create life. Now Angela breaks the eggs Jon was going to use to make his waffles. Angela’s first lines in “It’s Summer and We’re Running Out of Ice” were about eggs. And now the fact that Angela accidentally reached back in time and influenced her grandfather in 2009 is like the chicken and the egg paradox. That was cool. 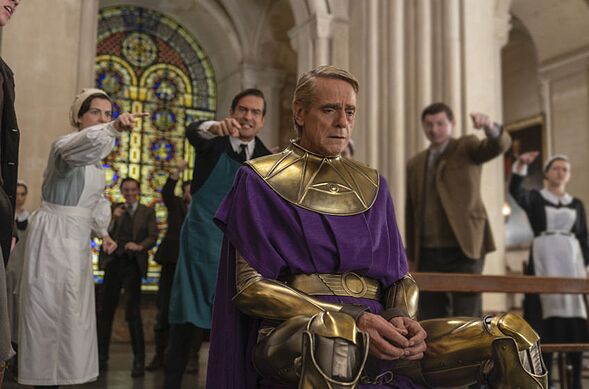 Meanwhile, the 7th K are waiting with a tachyon canon ready to kill Jon. Angela suits up and takes the fight directly to them even though she is massively outnumbered and outgunned. Jon smiles and tells Angela that this is the moment he falls in love with her. When she can no longer hold off the 7th K, Jon emerges and disintegrates the remaining terrorists and halts their bullets. Angela thinks they’ve won. But, one of the 7th K that she shot activates the tachyon cannon and kills Jon.

The episode ended 6 minutes early. I decided to wait through the credits. When they were almost over, the volume of a scene started. When lights came back up, we saw Adrian strapped to a tree. One by one, the clones walked up to Jon and told him that he shall not leave. Adrian said no to every one of them, who, in turn, crushed a tomato on his face. The clones just want a god to worship. 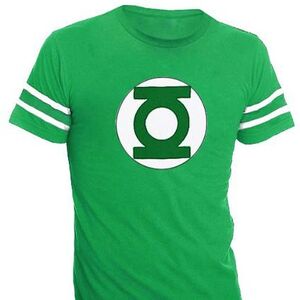 We know Adrian’s trial takes place in late 2013 or early 2014. It ends one year later. We don’t know how long he’s been in captivity. The Game Warden visits Adrian and gives him his anniversary cake. Earlier in the episode, Jon replied to Angela’s question about transferring his powers by saying he thought it was possible. Is this cake a way to do that? Adrian has never eaten it, so who knows. But he does find a horseshoe in the cake which he uses to start clawing at the floor.

Next: Interview: For All Mankind’s Chris Agos on playing legendary Buzz Aldrin

Were the waffles supposed to be a way for Jon to transfer his powers to Angela? Will he transfer his powers after Lady Trieu’s clock (Hong Chau) activates? Where is Wade (Tim Blake Nelson)? We know he’s likely masquerading as a 7th K member. What role will he play in the finale? Lots of questions. I wonder if we’ll get any answers.

Meanwhile, there was a ton of music this week:

What did you think of this Watchmen episode? Do you think Jon will manage to reassemble himself and become completely timeless? Let’s discuss in the comments!